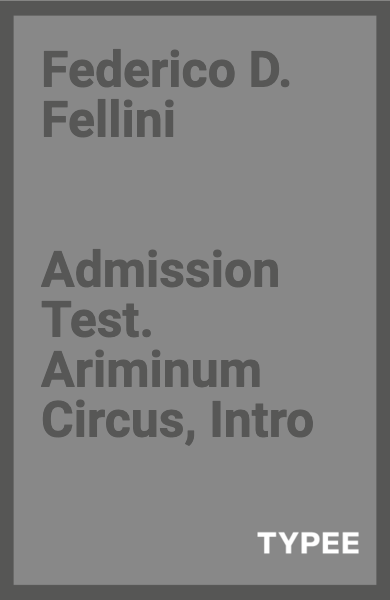 Ariminum Circus is a book for many, but not for everyone. Perhaps only for some, if not for a few, or very few. To be completely accurate: literary agents, editors and critics are unanimous in believing that the only possible Reader of the novel is its Author (Note 1). Who considers the circumstance encouraging, since over the centuries the works of guys like Dante Alighieri, William Shakespeare, Herman Melville, Marcel Proust, Vincent Van Gogh, Orson Wells, Eiichirō Oda have been found in the same situation: crushed by critics who soon fell into oblivion, those masterpieces have achieved immortality. A bit like the doctor who, in Woody Allen's film, diagnoses Zelig with brain cancer as the cause of his deviant behavior: except he is the victim of a brain tumor two weeks later.

Having therefore acknowledged the stubborn hostility expressed by the publishing establishment, but animated by the unshakable conviction that History will prove him right, the Author has deemed it appropriate to prepare the psychometric test below, consisting of a simple battery of ten items, so that everyone can, as a preventive measure, assess which reactions could be induced by the novel in relation to specific attitudes, skills, idiosyncrasies.

Based on the famous one drawn up by Alberto Manguel, the questionnaire makes use of personality indications ranging from Umberto Eco to Italo Calvino, passing through Plato. Operation is very simple. Check how many of the following statements you agree with. Upon completion, you will know if, or to what extent, Ariminum Circus is right for you.

1. The Ideal Reader adheres to Deleuze's Pop Philosophy: reading a book today is like listening to an Apple Music channel, watching a Wes Anderson movie, seeing a Westworld episode, writing a Wikipedia entry, immersing yourself in virtual reality of a digital painting. “Every attitude towards a book that requires different attention comes from another era and definitively condemns it”.

2. The Ideal Reader knows that man is imbued with the desire for narratives. Plato in the Cratylus, Eco recalls, assumes that words do not represent things, but rather the origin or result of an action. They are micro-stories. Two thousand five hundred years later, Kevin Kelly identifies the essence of the digital transformation underway in the mutation of objects in activities (so book-related activities will becoming “booking” – researching, sharing, socialising). (Note 2)

Harari summarizes the question as follows: “Human beings prefer to think in terms of stories rather than facts, numbers or equations. And the simpler the story, the better it is”. Even when we think: we are stories for ourselves. The answer to the question “And who are you?”, which the Caterpillar addresses to Alice, can only be given in the form of a story capable of defining us: our values, our abilities, our past history, our successes, mistakes, justifications. With this awareness, the Ideal Reader however opposes a form of resistance, almost heroic, to what is successfully imposed today: the plot based on predictable twists and banal intertwining with their unequivocal protagonists.

3. The Ideal Reader appreciates a narrative developed not in a single linear drawing, but through many sketches in the plural. Individuals who fight, travel, love, chase chimeras and desires: the Knights and Dames in the Enchanted Palace of Atlantes, the Dubliners of Ulysses, the superheroes and villains of the Marvel or DC Comics universes, the characters of a video game.

4. The Ideal Reader knows that, in the past, making literature consisted of inventing games based on a pre-existing deck of cards: whoever invented the best game won. Italo Calvino, in particular, argued that it was a question of “assuming the narratable as a combination of cards”. Today, making literature coincides with the invention of a different deck. Imagining new cards and putting together cards previously considered incompatible. A Jack of Hearts, a Monopoly Contingency ticket, an Undead from the Yu-Gi-Oh! Deck.

5. The Ideal Reader seeks an embrace with all the references called in the field, from whose richness and variety he judges the value of the text: ideas, citations, re-elaborations that can range from Dante's Comedy to the most up-to-date neuro-scientific treatises are welcome, from Roger Waters’s philosophy to Martin Heidegger's poetry, from Munch's Kiss to the latest diagnoses on the so-called “age of empathy”.

6. The Ideal Reader believes, with Montesquieu, that in a story no subject is forbidden and no one is obliged. It is also legitimate to go from serious to facetious, from political reflection to sentimental intertwining, from satire to utopia. A similar mechanism allows us, browsing the Web, to go with a click from one site to another, from a blog to a photo on Instagram, from a quote by Oscar Wilde to a video posted on the National Geographic YouTube channel.

7. The Ideal Reader loves the Writer who would never boast of being original. Which mixes ideas, makes shifts, proposes mixes. He knows the world has been the same for ten thousand years. The differences between Oedipus, Hamlet, Philip Marlowe, Rick Deckard and Dylan Dog are minimal: they reside in the adherence to the times in which their authors lived, in the declination in different narrative forms, in the settings, in the level of complexity of the same idea (in the Platonic sense) or entelechy (if we turn to neo-Aristotelianism): in short, of the same archetype. Simultaneously, the Reader seeks in the book the original, distinctive imprint given to that archetype by the Writer. Therefore if his imperative is: “remix. And that's it”, in each remix he looks for something unique, never said before. In other words, for him the true Writer is a visionary like the good barman, who knows how to invent inimitable cocktails with the same elements. Maybe by adding a very special secret ingredient.

8. The Ideal Reader does not believe in the distinction between literary genres or prose and verse (since for Boccaccio the word “Poetry” includes both, Carver, Bukowski and Jarmush’s Paterson write “stories in the form of poetry”, Gogol defines Dead Souls "a prose poem” - label, in Nabokov opinion, also suitable for novels such as Madame Bovary or The Strange Case of Doctor Jekyll and Mr. Hyde).

9. The Ideal Reader loves the weird and the eerie, two categories, according to Fisher, of the “uncanny” Freudian. The weird is that which is out of place, which brings into the familiar something that is normally found outside of it. The art form that best represents it is the mash up - the combination of multiple elements from different backgrounds. Hence the predilection for the weird of Surrealism, according to which the unconscious is a machine for film editing, a generator of bizarre combinations. The eerie, on the other hand, concerns the outside: it is rarely anchored to circumscribed and inhabited domestic spaces. We meet him in landscapes emptied of human presence, which make us wonder: what happened to originate those ruins, that absence? The eerie asks fundamental questions relating to existence and non-existence: why is there something here when there should be nothing? Why is there nothing here when there should be something? It is what determines that atmosphere of disorientation, that sense of restlessness and anguish in which the novelty of De Chirico metaphysical painting and manga, the Japanese comics, consists.

10. The Ideal Reader believes, like Whitehead, that Western culture consists of glosses to Plato; like Schlegel, that novels are the Socratic dialogues of our time. After all, the first protagonist of a serial fiction is Socrates. Today Plato would write things like True Detective (Season 1).

Solution. How many statements do you reflect yourself in?

0: Scrolling the first lines of the test has already caused you ailments such as nausea, vomiting, skin allergies, lesions of the autonomic system. Stop before the clinical picture becomes irreparably complicated.

1 to 3: Congratulations on goodwill, but other readings are more suitable for you: the biography of Katherine Kelly Lang, for example.

From 4 to 6: You will be able to become passionate about the events of some characters.

From 7 to 9: You are the Ideal Reader of Ariminum Circus.

10: You are Federico D. Fellini. You wrote Ariminum Circus.

11 to infinity: You are God. Not only have you written Ariminum Circus, but also every possible sequel, prequel or spin-off, their translations into all languages and dialects of the Universe, as well as every possible attempt at imitation, plagiarism and copying, partial or total, authorized or unauthorized, present, past and future.

Ariminum Circus is divided into Five Seasons. If you scored at least 4 in the test, start reading and try repeating it at the end of each Season. According to the psychometric calculations carried out by the Author in collaboration with the Max Planck Institute, your learning curve should gradually increase. You will be able to obtain better and better scores, up to, at the end of the Fifth Season, even 10.

In some, very rare, cases, after reading the Notes on the back cover, some Readers could even reach 11 and beyond.

(1) "In Ariminum Circus", this is Blanchot's comment on the unpublished manuscript that came into his hands in circumstances that were never well understood, apparently while rummaging through the drawer of a Rococo bedside table among the underwear of the geisha who kept a harem near Zaragoza, at least according to the testimony given by Vila-Matas in a side note by Bartebly & Co., also present in the first Spanish limited edition, but then disappeared (a fact that evoked unlikely connections with the Orbis Tertius of the Homer of Buenos Aires and even with certain illegal activities managed by the Chinese mafia in the Dark Web), "writing becomes illegible for all and decipherable only by oneself: demonstrating that in certain, very rare cases, illegibility is precisely the reason for which a book deserves to be read ”. According to other sources, however, Blanchot was referring to a text by Joyce or perhaps Mallarmé, if not Benito Jacovitti. Still others deny that Blanchot ever wrote such words, but that it is a forgery, in the illustrious tradition that descends from the Donation of Constantine (Editor's note). 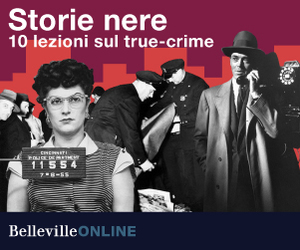 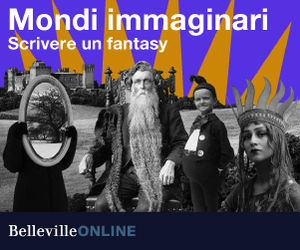